A total of 9 stations were sampled on Monday June 20th. The selection criteria considered sampling the four terminal points (which also correspond to contrasting socio-economical situations), the two most transited stations (which are also shared between both lines), the most touristic station, a station next to one of the biggest hospitals in the city and one station in an area with night life activity. The sampling date took place during the Football Eurocup 2016, which was held in all France with Marseille as one of the main hosts cities, so an unusual contribution to the metro microbiomes from the incoming tourists for the event may be expected. At each station we sampled three surfaces by triplicate: 1) Ticket kiosks, 2) Handrails (if available, 1 black plastic rail from escalator, 2 stainless steal handrails from the stairs) and 3) Turnstiles (In most stations there were not turnstiles so we sampled the card readers and the glass sliding door). In addition we always sampled by triplicate the metro car that we used to move from one station to the next one (swabbing chairs, handrails and handles). A total of 107 samples were finally taken, plus the positive control and 3 negative controls. 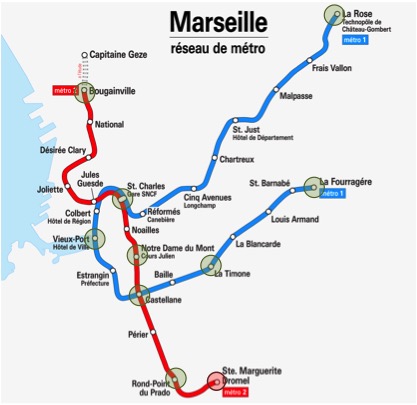