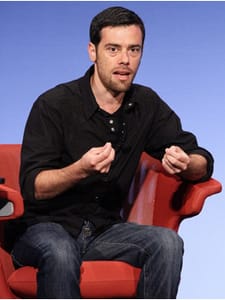 Nathaniel Pearson, PhD, Geneticist
Nathan Pearson is a geneticist at Knome, Inc., where he and his colleagues build simple, engaging tools that compare one whole human genome to the next, in order to cast new light on human health and history. Fascinated by human genetic diversity since working as a young student in the laboratory of Luca Cavalli-Sforza (Stanford University), he traveled with Spencer Wells (now head of the Genographic Project) to collect DNA from people living throughout Eurasia, to reveal traces of ancient migrations recorded in their genomes. In doctoral work at the University of Chicago, he studied patterns of sequence variation on the great ape sex chromosomes, spotlighting how mutation, recombination, and natural selection have jointly made the X and Y ever more different from each other. Later, in post-doctoral work at the University of Michigan, he first delved into the emerging world of high-throughput sequencing, grasping its power to address important open questions in biology. Today, working with a talented team of scientists and programmers, he helps researchers and consumers sift through the billions of letters in each human genome, and understand which important spellings make each person unique.

Nora C. Toussaint, PhD, Bioinformatics Scientist
Nora C. Toussaint joined the New York Genome Center in September 2013 as a Bioinformatics Scientist. She received a Masters degree in Computer Science with a minor in Biology from the Humboldt University Berlin, Germany. Nora was awarded a PhD in bioinformatics with highest honors from the University of Tübingen, Germany for her work on machine learning and combinatorial optimization in peptide vaccine design. During her PhD studies, she was a visiting researcher at the Centrum Wiskunde & Informatica (CWI) in The Netherlands, and at the Bar-Ilan University in Israel. As a postdoctoral researcher in Dr. Eric Pamer’s lab at Memorial Sloan-Kettering Cancer Center she was involved in the analysis of microbiome data and bacterial genomes. At NYGC, Nora’s focus is mainly on metagenomics, bacterial as well as viral genomes but she also has an interest in cancer genomics.